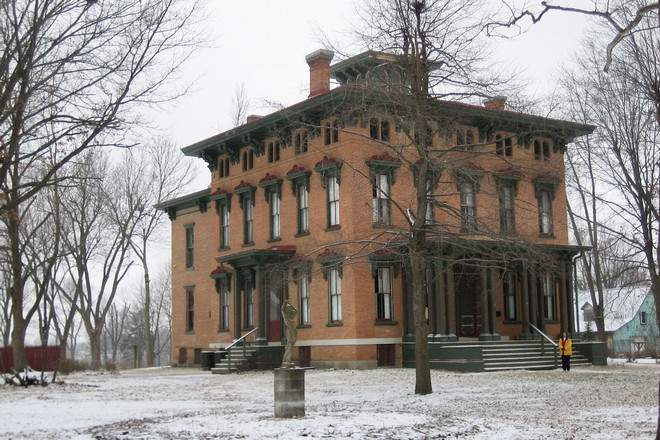 The Shelbina Mansion (a.k.a The Benjamin House) is an unusual example of Italian Villa style in outstate Missouri. The design is notable for its generous proportions and ornamentation, applied to a basic form that is a standard, classically-derived house style common to Missouri. The house was constructed between May 22, 1872 and March 5, 1873 and was originally named "Vesper Place".

The house represents early acceptance of nineteenth century technological benefits in outstate Missouri because it originally had a circulating hot and cold water system (partially removed) and a central heating system (replaced). The Shelbina Mansion is the most prominent example of residential building art in Shelby County. The original owner-builder was the wealthiest man in Shelby County. He developed the floor plans and hired a St. Louis architect, Henry G. Isaacs, to design the residence. The design was reputedly inspired by a residence in Washington, D.C. which Benjamin particularly admired. The cast iron, bracketed canopies on the windows of the front block are unusual in Missouri. To date no other examples have been noted by the State Historical Survey and Planning Office or by Heritage/ St. Louis, the survey of St. Louis City.
© The Shelbina Mansion
Powered by ZENFOLIO User Agreement
Cancel
Continue